Well, my parents wanted me to get really good at… the accordion. Yes, the accordion of all things. It makes more sense when you know they grew up in (what was then) Czechoslovakia and escaped to the United States when Soviet tanks started rolling into Prague. They were tough cookies with a much different outlook on life compared to everyone else in suburban Colorado where I grew up.

“Tommy, do you want to learn how to play the accordion?”

I’ve always had an open mind, even at six years old. Little did I know that my answer would set the course for over a decade of weekly lessons, practicing at least 30 minutes every night, and dominating accordion competitions during the summer. 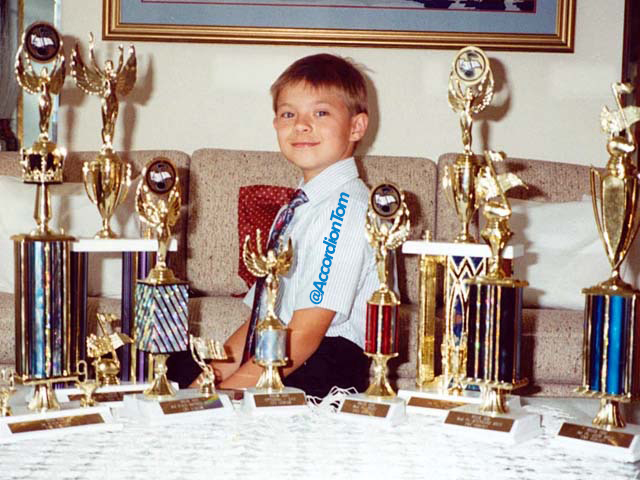 As a kid, I got good – very good. I won the top prize in my age group almost every single year. That was mostly a function of practicing a lot, having a great teacher, and of course my perfectionist parents being on my case all the time. Unfortunately, as talented as I knew I was, most of society didn’t see it that way – especially my schoolmates. I would bring my accordion to school and play christmas carols or play at the talent show, and most kids just stared blankly. The more vocal kids called me Steve Urkel and made it clear just how dorky the accordion was.

For a very long time I was ashamed of playing the accordion. I was incredibly self conscious and hated playing in front of anyone except my parents. When playing for other people, I often got so nervous that I couldn’t play half as well as I could when I was just practicing by myself.

When I went off to college, I brought my accordion with me but hardly ever played it. It was an oddity. When people found out I played the accordion, they looked at it more as a “touch your tongue to your nose”-type talent rather than actual “musical” talent. However, I did start to stumble upon people who accepted it and thought it was really cool. Even still, I would find a reason to decline when they asked me to play. “Oh, it’s kinda packed away right now,” I would say.

As I got older, I ran into more and more people who thought the accordion was really cool. Some were fascinated and would beg me to play. One of my roommates would even bust into my room while I was practicing and watch me play.

At the very same time, I was getting more and more comfortable with who I was as a person. I realized it was okay to be my awesome accordion-playing self. Everyone has an opinion about everything (right or wrong), so who cares what anyone thinks? For every person who hates the accordion, there’s another who thinks it’s awesome. And the latter are my kind of people.

Now I’m having a blast learning new cover songs, making videos, writing and teaching others how to play the accordion. If you like my stuff, please be sure to subscribe to my blog and follow my other social media channels! I look forward to connecting.